I have a late 2015 model Retina iMac with a 27 inch display. The iMac was purchased direct from Apple with a VESA mount pre-installed. The mount is secured to the iMac with two pentalobe screws. Does anybody know what size pentalobe screw's are used on this model iMac? 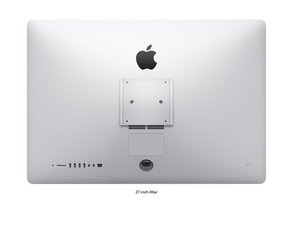 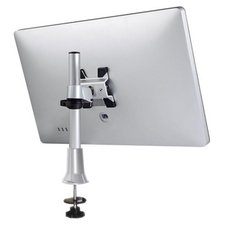 The bracket piece is needed! And it needs to be a VESA mount. I have not seen any desk mounts that worked without a VESA mount or without the complete foot assembly present on the system for any of the newer 'Thin Series' iMac's.

I suspect the CodyTech mount is similar to the NuMount Pivot Desk Mount which is described here: NewerTech - NuMount Pivot Desk Mount. If you download the PDF you'll see they have a custom piece that replaces the foot like Apples VESA mount but offers a smaller profile. As you don't have the same mounting as the older iMac's and the piece that you do have on your system now is not going to allow you to mount the CodyTech unit as the screw alignment and height are different. Again, remember this was for the older models not this series. 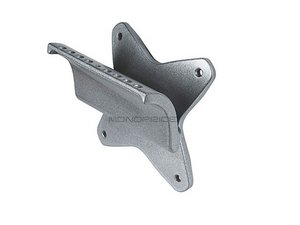 You might want to reach out and talk with them to see if having just the tail piece installed if there is a way to get it to work otherwise you'll need to try it your self.

Here is the special frame to connect to VESA by mounting via the cable hole in the foot: VIVO STAND-MACB VESA adapter for iMac.

The other option which some people have done is to drill & tap the foot to mount the VESA unit. Here's a YouTube vid: 21.5" Wall Mount.

In any case I wouldn't try replacing the VESA with a standard foot just to then use an adapter to remount it via a VESA mount that would be a waste.

Thanks Dan. You are correct, the Cotytech mount can be attached directly to the iMac just like the NewerTech mount. From what you've said I gather that even if I could remove the VESA adapter from the Retina 5K iMac it wouldn't matter because the alignment of the screw holes on the mounting bar is different to those found on older iMac models. Cool, that's all I needed to know. It also looks like the pentalobe screws are significantly larger than the ones used on the MacBook Pro's. I don't think anybody makes a commercially available screwdriver that would fit these screws.

You can get the tools at iFixIt store

Can you confirm the P5 Pentalobe is the same screw type used in the 2015 Retina iMac? According to iFixit the screwdriver is only for use on the MacBook Air and all MacBook Pro with Retina Display's.

I have the following tool kit

But I do not know how big the screw are one the Retina iMac.

Cheers. Is there a set containing all the different sized Pentalobe heads? I'll buy that and then see what fits. God bless Apple and their non-standard screws.

I bought this one where P2,P5 and P6 are included

Have not seen any other sizes but my Apple knowledge is not that deep but I have been able to open iphones and Macbook with the screwdrivers.

Not without a complete teardown. You could have ordered it with it,

@danj knows more about this than I do, maybe he will jump in here.

Please see this answer: Is the stand removable?