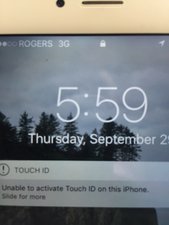 Any one experiencing Touch ID not working on iphone 6 after a screen replacement since IOS 10 was released.

I have replaced 100's of screen with no issues with the touch ID. I have now done two iphone 6 with IOS 10 on them and both have non-functioning touch ID. This look like it might be a similar issue as last year with error 53.

that's strange, in this blog, it says even the China made iphone 6 screen can work well with IOS 10 an d nothing's wrong. http://www.etradesupply.com/blog/ios-10-...

I'm going to go with either the home button extension cable is damaged or the home button cable. Try extension first if not can't do much about touchID maybe you could try doing an update through iTunes, reset network settings and then restore as last resort?

I looked at both cables under the microscope and there is no damage at all. I will be replacing the extension cable this weekend just to see. If that does not resolve the problem, i will be reinstalling to original screen to see what happens.

Having same problem. Replaced screens on two iphone 6 phones with ios 10. Now touch ID not working. It has to be a ios conflict because I do fix phones frequently and NEVER had touch id issues fail before.

I have replaced the flex cables as was suggested and it made no difference. I put the cable that had the touch id failure in my iphone 6 and it works fine.

Disconnect the battery before you disconnect anything. Reconnect all cables, ESPECIALLY THE HOME BUTTON CABLE before you reconnect the battery and you won't have issues. I have an iPhone 6 sitting next to me that I've swapped out nearly every single part on, short of the actual home button, and its runnion iOS 10 and Touch ID works fine. Its even got the cheapest screen I could find, just to prove that the screen doesn't matter. Its also got a replacement home button flex that I ordered from China, again, just to prove that isn't the issue.

Saying there is some mass error just because of 2 phones is just silly.

We have the same problem here in Sweden but only on i6S, and you dont have to replace the screen to get the touch id problem you will get it just by removing the home button and all the flex cables it looks like.

I'm having the same issue, Repaired 21 phones with iOS 10 and 6 of these have given this error. 3 of those we removed with a hard reset. The other 3 we couldn't recover from.

Do you still have this problem?

I had the same problem. I DFU'd the phone and the touch ID works again.

Have you tried a new home button extension flex cable (the cable that runs from the top of the metal plate to the bottom)... I work on these every day (own a repair shop), and at least once a week I damage one of these cables without knowing it at first. They tend to be the most fragile on the bottom end, and if not taken off carefully the small metal plate under the bottom connector comes off.

Yes i already tried that with no luck. I took the back plate with cable from my iphone 6(my touch id works fine), and i installed it in my customer's phone and it still had the touch id failure. I then installed the customer's back plate with cable in my own phone and my touch id still works fine. So i habe rules out the cable has the problem. I am still convinced that this is an IOS 10 issue.

Does anyone have a solution I am really stuck with my touch id. I have swapped it with 2 new screens but still no luck, it just says can not activate touch id.

Maybe if you read the answers you would see that all possible solutions are covered. First check if the flex cable from the home button is not damaged because they tend to rip very easy. They can still work even if they are ripped slightly.

If that is not the case, see if the device is running ios 10. If that is so, you might find a solution if you put the device in DFU mode and perform a complete reset.

I has nothing to do with flex cable. It's the update that detects screen being removed and touch id disabled. No solution yet, hope someone will solve it soon.

I would tend to agree with this as well. I put the home/touchid button back on the original cracked screen and everything worked as it should. iPhone with cracked screen works just fine - it's just that it has a spider web screen.

After moving the home button back to the cracked screen, reset the phone and verified this with setting up - no Touch ID error. The moment I move it back to the replacement/new iFixit display I get the error. Very frustrating. Paid $75 for a part that does not work!!!!! iFixit should NOT sell these without disclosing this issue to it's customers.

Device was completely reset as well - and yet it still had the Touch ID error.

I just finished putting together my iphone 6s and had the same issue with the touch id not working. The home button connection was not seated properly. I undid the connection and pressed it back on firmly and works fine now.