Why is my display having poor output with changing output?

My iMac hard drive burnt out so had to replace the hard drive and followed the steps as expected to replace it with a hybrid solid state hard drive of 2TB space. Problem now is I can instal the OS X and boot it up and log on, however the display is all funny. The images is like boxes of 4 cm of odd images from elsewhere from the screen. When I open some apps though the iMac would freeze. So it is either the logic board or graphics card I must have ruined I assume??? 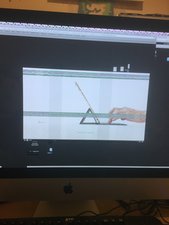 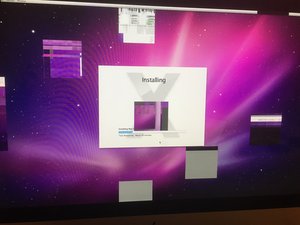 I am not sure what to replace or repair now. Very frustrated as figured only the hard drive is the issue but maybe there is more...so may well make the iMac an anchor for someone.

Please tell us what SSHD you put in. We need to know the make & model to see if it is compatible with your system.

It would also help if we knew what your exact system is. Take a look at this listing: iMac models to find yours. Paste the URL of it in your question so we can see.

the iMac model is

Your HD's specs: Seagate NAS HDD ST 2000VN000. It is also not a SSHD but a NAS drive which is really not suitable for a desktop system.

NAS drives tend not of have a deep write cache queue as they are often connected to a RAID controller. The reason here is with to big a Queue is if the disk write operation failed because the drive failed the amount of data needed to back wind would be to great given the speed of other write operations being performed on the other disks of the RAID set (up to five per controller and you could have multiple controllers interwoven with each other in a NAS appliance.

The error you are seeing 4MOT/4/40000003: HDD is a fan motor error. The code HDD is telling us which fan, the hard drives. I suspect you forgot to connect it or the connection is bad.

As to the upgraded HD: This series only has a SATA II (3.0 Gb/s) SATA port so the drive you put in must be able to support that SATA I/O speed. We'll need to know what make & mode of drive you put in to be sure if its compatible. Often one can encounter odd issues and a display problem is possible depending on your exact iMac model and how much RAM you have on the system.

In addition you could have a damaged display or the LVDS cable or the graphics board is messed up. You'll need to see if an external monitor works if it does that rules out the graphics board, then you only have to worry about trying out a new LVDS cable to see if that fixes things. I would also recommend you make a detailed inspection of the logic board connector. In the process of taking the cable out (or in) you could have damaged it.

To fix the HD issue I would recommend using a desktop drive not a NAS drive as you'll get better performance!

If we compare the specs between the NAS and the SSHD drives the SATA interface on the NAS is a fixed SATA III (6.0 Gb/s) were as the SSHD has SATA port auto sense technology so it will work in a SATA I (1.5 Gb/s), SATA II (3.0 Gb/s) or SATA III (6.0 Gb/s) system. In your case your system is SATA II (3.0 Gb/s) so your current NAS drive is not suitable here.

While the NAS drive may appear to work it can run hot and also cause your system as a whole to run hot as the drive & system end up doing more work trying to fix the errors of the transmission between the two of them. So this could explain your display going nuts as the GPU is overheated. At this point its possible you could have damaged things do to the overheating.

OK, So we need to switch out the drive but that's only the start you also need to replace the built-in thermal sensor the original Apple drive had. You'll need to use this part: OWC In-line Digital Thermal Sensor for iMac 2009-2010 Hard Drive Upgrade I strongly recommend you don't use any software solutions here but to use the hardware solution. Over the course of time we have learned the software solution will cause hardware failure's either the fan motor will be burn't out or the constant thermal shock the system encounters with the delayed ramp up and ramp down as the software is not as fast which fatigues the logic board.

The fact you got a fan motor error implies the fan has died or is not connected. I would recommend you just replace it while you are at it. Here is the part you'll need: Hard drive fan unit P/N 922-9152.

I would also recommend you install a better thermal sensor & fan app like this one: TG Pro for less that $20 US its worth it!

Lets start there and see what happens. Hopefully your display artifacts disappear.

Many thanks for the advice. I was circumspect about the hard drive on hindsight I shouldn't have bought it but too late now. So my question is then if my GPU is wrecked how much is that going to cost me to replace? Seems like a lot of effort to replace the initial problem of one hard drive problem and does AHT saying no other problem means GPU is ok? I am in New Zealand so getting all these parts would take time and cost more money so the spend on another new hard drive, fan motor and thermal sensor do add up then the GPU replacement be some more cost to it too. Only reason to do this is I like the big screen of 27"

@maniacz - Lets dig a bit deeper here then. Can you connect your system to an external display (VGA or HDMI via an adapter) That way you could double check if the display was OK. The other thing here is if you have a second Mac can you access your's in Target Mode? And lastly can you share the systems screen? This will help in isolating if the logic board is good.

So I have connected to external display and it is not the display that is damaged. I don't have the adapter for firewire to thunderbolt to do target mode. But my share screen shows exactly what is on the original iMac with the funny output. So I guess my Display is fine at least. Does booting it up from an external hard drive help to prove anything additional though I have not done this yet.

Sadly, I think you've isolated it down to the logic board problem. It could be the graphics board or something on the main logic board they messed up.

The external drive running a known clean copy of the OS should remove the possibility of an OS corruption issue.

A 4mot code indicates an error within the processor's threading processes. This is very uncommon and could indicate a virus. Several zero day exploits exist for your model; I would take it in to an IT security specialist. In the meantime power down your system and ensure it is disconnected from your network as certain exploits have the ability to bridge an airgapped system which could compromise other devices on your network. Good luck

@sherrytech - Sherry - Where did you see this a report that blamed a threading process was corrupted with an error code 4MOT?

Did you even try to find the 4MOT error code? This error is a fan error MOT = Motor. So we know its not a virus or other nasty here.

So what do you think it could be then??

@sherrytech seriously? I'm 12 years old and even I know that your answer is plain out crap. You seriously need to figure out how to fix electronics first.