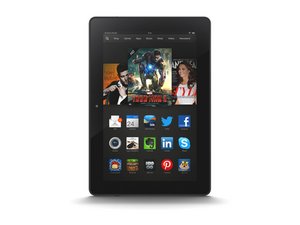 battery died how do i replace the battery in the kindle fire hdx 8.9

Here is a link which shows how to open your Kindle Fire HDX 8.9.

Once it is open ( at about 2:33 minutes into the video), you should not have to remove any flex cables, except the battery cable (which is shown being removed at 3:05 minutes into the video) to remove the battery. The video does not show how to remove the battery, but it seems from the video that you should just have to remove any tapes connected over the top of it, check that there are no cables or retaining latches or screws holding it down and gently pry it out of its' position. It may be stuck down with some adhesive on the underside so it may take a bit of gentle persuasion to lift it (see note below). Do not use heat or a sharp implement to remove the battery. You do not want to puncture it or heat it unnecessarily

For installation of a new battery, just reverse the procedure used to remove it.

Note: Here is a link for a Kindle Fire HD 8.9 (it has a different opening procedure and battery etc but if you view it from about 6:10 minutes into the video it shows how to remove the battery from its' position. Yours will possibly be able to be removed the same way.

Hopefully this is of some help.

Jayeff linked to the only video/instructions I can find for disassembling the HDX. However, there are a few things they don't mention in the video, that I think would be helpful -- probably way too late to help Cynthia.

When you are prying off the black strip on the back top of the Kindle, note the speaker locations. The speakers have tiny (~1" X .5") tympanums which are easy to damage. Do not push your prying tool under the speaker grills. There's no glue there any way. That may have been obvious, but I put two tiny scores on one of my speakers. It seems to be fine, but I could easily have torn it.

Second, under the camera and light/flash, the shiny black strip has three tabs/prongs that perpendicular to the flat part of the strip that stick into the tablet. They are tiny little nubs about 1/16" - 1/8" wide and maybe 1/16" tall (extended from the flat). If you pry directly under the camera, you are likely to either fold these tabs up parallel to the flat part of the strip, or break them off. Be careful in this area too.

If you fold a tab, gently pry it back down so that it is perpendicular to the strip. You will notice three tiny holes under the camera and light/flash. The little tabs/prongs go into those tiny holes. This helps to position the strip properly.

If you examine the inside of the strip carefully, you will find other tiny protuberances that match tiny indentations/holes in the tablet where the strip seats.

When replacing the black strip, carefully line up all these little protuberances and holes, but give preference to the ones around the camera. Do those first.

Third, the battery I bought came with a little tool kit. The two plastic prying tools were servicable, but none of the three screw drivers fit the hex-star screws in my Fire HDX. You may need to go buy a tool just for those screws. I was lucky to have access to a well-equipped lab.

Finally, regarding removing the battery. Oh, my, gosh. It is glued down tight. And it is flamable. Do not try to remove the old battery without discharging it as far as you possibly can. If you puncture the battery, you could get a big flame in the face. I accidentally caused some small punctures which created little sparts and a burning smell. There may not be any good battery replacement videos because of the potential liability for replacing something this fraught with possible danger.

Now on the other side of the caution/scare -- I had my old battery pried up at a right angle, that is, bent in the middle at 90 degrees and there was no problem. I didn't puncture the battery until I started using an Xacto knife to cut the glue loose. That video that Jayeff linked to , the second one, makes it look like the battery just easily lifts out. Mine was glued down over most of its back, and the glue was like sticky concrete. Once I had pried an inch or so of the battery up with a blunt metal spludger , I couldn't get any further. I had to start cutting the glue with a knife slid under the battery. Which is when I caused a couple of minor punctures. I put on eye protection.

Perhaps the battery would come up more easily if one used a heat gun, but applying heat to an old battery seems like a bad idea.

Yes, the battery is glued down, impossible to remove. The video of how to take apart Kindle HDX8.9 never shows the battery being removed, as does for other parts of the tablet. I wish I'd paid attention to this before buying a battery. The video is good, but not for replacing the battery, which is probably NOT doable.

It is not impossible to remove. I successfully removed and replace mine. It has been done at least once, ergo, it is not literally impossible. However, I agree that it is very difficult and possibly dangerous. If you read my last four paragraphs I explained exactly how difficult it is. "the glue was like sticky concrete."

SUCCESS! Okay, I have just replaced my HDX8.9 v3 battery a day ago. The key is you have to heat the back side of the battery (heating through the plastic cover) with a hair dryer. I heated one wafer (battery has two wafer squares), the one that does not have the connector, 30 seconds , and slowly worked the battery loose by prying it up with the pry tool and pulled up corner to corner, be patient it will take a little time to get it up. I used the tiny flat head screw driver to go side to side to get some of the glue to separate., once about half the wafer is up you can grasp better and the battery wafer will come up somewhat easier. I separated the wafer from the wafer still glued. I then unhooked the battery connector and then heated behind that last wafer. Follow the same procedure described for the first wafer. My Kindle HDX is working great with the new battery!

How is your battery life with the new battery? I find that my battery goes flat after a few days or a week even if I have not used it. Of course, tablets do t hings in the back ground and run the Wifi interface and all that uses battery. It just seems to go flat faster than I feel like it should. I can' t remember what performance was like when it was new, so I may be completely wrong. I seem to get plenty of usage when I start with a full charge and use it for several hours.

I worry that the replacement batteries, while unused, might be old and old is a problem for Li based batteries, even if they're unused.

What is the best replacement battery for kindle fire HDX 8.9? Does Amazon sell them?

Amazon does not appear to sell the battery for your Kindle.

They are available on Ebay here Choose your preferred supplier.

This video shows everything being removed from Kindle Fire HDX 8.9... do you have to remove everything just to replace the battery?