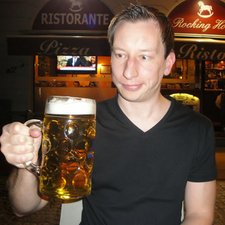 How to restore MacBook to factory settings after formatting hard drive

Hi. I'm good with PC's but a noob with MACs.

My friend bought a macbook 1,1 mid 2006 and an IMAC from a car boot sale but they were both locked to the previous user (not stolen). He wanted me to factory reset both machines so asked for my help. Obviously, as these are old machines, he's not willing to pay £70 for a restore disc especially since I don't know if it'll work.

I managed to "acquire" OSX 10.4 and it worked fine for the IMAC. So I tried it with the macbook, which was already running 10.4.6 but it wouldn't run on boot-up. I could access it through the desktop but I needed the password to run it.

I took the hard drive out and formatted it on a MAC to MAC OS extended. Now when I boot up the machine, all I get is a folder with a question mark up on the screen and it doesn't boot off the disc when I hold 'c' on boot up.

Is the macbook salvageable? Why does the disc not work?

Tell us more about them being "locked"? What kind of lock are you encountering? Also the last four figures of the serial numbers on the machines so we know exactly what they are and what systems they will run.

Thanks for replying. The Macbook was just stuck to the previous user's account. You could still get through to the desktop.

I didn't know how to remove the user's account without a password and it was running really slow so I thought formatting the hard drive would be a good idea. The serial number last four digits are WU9B.

Use the disk utilities to format the drive. On a machine this old I'd opt for the write zeros option to map out any bad blocks and then install a clean system and do your updates to 10.6.8.

I doubt you current installation is a retail version, it is probably gray and machine specific.

I'm going to agree with mayer on this one. Those gray discs that usually come packaged with the machine are usually machine specific and won't run on just any device. As mayer suggested, go for the Retail disc...what's $20 considering that 2006 MacBook is still a pretty good laptop.

I guess I was trying the wrong version then. Funny how the newer one is so much cheaper than the older one. I'm from the UK and it's not available on the Apple UK website but I've seen some on ebay going cheap. What is the gray version and how can I avoid purchasing that? Also my non-working install disc is stuck now. Any tips on removing it apart from the eject button?

Oh and will a used disc work the same as a new disc?

hold down "option" key when you turn on your computer.

if it ask you for a password then we can look in to other options, if not thats good.

you should be booting in to a white screen. put the disc in if you haven't and it should show up as a bootable option, choose it and follow the instructions to install the OS.